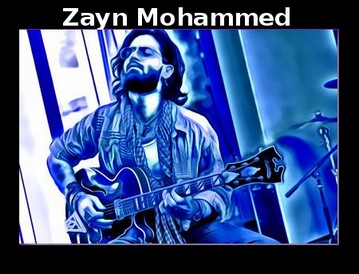 Appearing at the Latitude Music Festival was Zayn’s prize for winning the 2016 season of the UK Sky Arts TV series Guitar Star. Rock producer Tony Visconti, of David Bowie fame, welcomed him to the stage as, “an incredible performer, a consummate artist, great guitarist, great musician and a visionary!” George Benson, who like Visconti was a judge and mentor on the series, appeared via video on the stage screens with these words, “Zayn has a been an outstanding performer, because he shows what guitar is all about. Its about invention, it’s about personality…he’s truly a star.”

Once on stage he embodied two seemingly incongruous qualities, humility and rock star cool. For the television viewer it seemed like a dream come true situation for the young jazz guitarist – as he played the director intermittently cut to slow motion closeups of various teenage girls in the crowd swaying to his music. It was a joyous and well deserved culmination of an arduous competition. Unseen by viewers was the harrowing experience he endured, which is the stuff from which musicians’ nightmares spring.

After graduating from Berklee College of Music, Zayn spent some years in New York City honing his craft before returning to London. Shortly thereafter his London flat was burglarized and all of his laptops, computers, and hard drives were stolen. Yet another nightmare for a musician – in an instant years of work and irreplaceable media were lost. With nothing left to lose, he auditioned for Guitar Star and emerged as the clear winner.

Clearly, he’s been tested, but also blessed. After he left the stage at Latitude, Melvin Benn, the festival’s founder, told Zayn he wasn’t made for the little stage, he was made for the big stage. His perceptive observation was spot on, a delicate flower would have withered in that intensity. Not only did Zayn survive, he clearly thrived. Subtle, intense, emotive, inspired, inventive, resilient, resourceful, passionate, eclectic, and continuously evolving – that’s Zayn Mohammed. Life has given him an exciting fresh start, and I’m eagerly anticipating the next chapters of his musical adventure.

Listen below to part 2 THE MAIN INTERVIEW —

Check the Video Start Page for a video of Zayn

Below is 12 y.o. Zayn on Sky Television in the UK

Zayn mentioned he felt Derek Trucks was a kindred spirit after hearing this song.

Another of Zayn’s major influences — John McLaughlin with Shakti, 4th Dimension, and Remember Shakti with the late great Shrinivas

Posted on August 27, 2016, in Interview Notes, Uncategorized. Bookmark the permalink. Comments Off on Zayn Interview & Note.